James Hewitt was born in Dartmoor, England on June 4, 1770. As a young man he played the violin in orchestras in London before immigrating to New York City in 1792. Hewitt worked as a violinist, conductor, teacher, organist, music publisher and composer in New York and Boston throughout his life, with several years in the South towards the end of his life.

Hewitt wrote prolifically for the pianoforte. The 3 Sonatas for the Pianoforte, op. 5 were among his first published pieces for piano. They follow traditional classical forms and harmonies, being some of the earliest American piano sonatas.

The Four Quick Marches (disc 2) of around 1791 and the Three Marches of 1795-97 are some of Hewitt’s earliest of many marches. These appear to be original melodies, the first four written as non-programmatic quick steps and the others written to pay tribute to military figures and regiments.

The Gift of Apollo is subtitled, “The Ladies’ Musical Repository, being a collection of Songs, Duets, Marches, Rondos, Dances and Favorite Airs”.  Included in this recording are the solo piano pieces from this collection, three of which are renditions of folk songs: The Soldier’s Return (A Favorite Scots Air); Dander wauke boondah ho (Hindostanee Air); and Go to the Devil and Shake Yourself (A Favorite Irish Air).

The Twenty-two German Waltzes and Dances, op. 9, are described as “Composed and Arranged for the Piano Forte by J. Hewitt”. It is not certain which of the short pieces are original compositions by Hewitt and which are arrangements. Made up of waltzes, allemandes, rondos and a polonaise, these are charming pedagogic pieces written in America but harking back to the Old World of Hewitt’s youth.

Hewitt’s Six Sonatinas date from the end of the 18th century and, according to the title page, were written for the Harpsichord or Pianoforte. They capture the early classical style of piano writing, with simple patterns and harmonies expounded in traditional forms. The final Sonatina is the most unusual: a theme is set out, followed by two variations, and then a Chaise, whose melody is related by inversion to the theme. The Chaise is a rondo, with two contrasting sections, the first in the tonic minor and the second in the subdominant major.

Grand March and Tammany Quick Step (1801), as performed at the funeral procession at the Wallabout, Long Island” opens with a solemn march marked Largo. This march was most likely originally written for brass band but later published as a piano arrangement as was common practice with many of Hewitt’s marches. The Tammany Quick Step takes us from the bleakness of the march into a light G major dance, providing welcome relief and a glimmer of hope.

Pot Pouri (pub. 1800-1801) is a medley with nine popular tunes. It opens with a Largo, and then an Allegro molto, before moving into the first melody, “Sigh no more Ladies”. This is followed by “Let the Sultan Saladin”, “Nong Tong Paw”, “When Pensive”, “Malbrouk”, “Blaise et Babet”, “The Wounded Hussar”, “Poor Mary” and “March in Pizarro”. Allegro sections break up some of the melodies, while other popular songs go directly from one to the next. This compilation was very much in the style of the day, a set of pieces to play in the home with family and friends.

The Favorite March in Pizzarro and Waltz is attributed by researchers to James Hewitt. It is different from the March in Pizzarro (disc 3) where Hewitt is named as the composer. Both works may be from the opera by Hewitt, “Pizzarro, or the Spaniards in Peru”, based on the exploits of conquistador Francisco Pizarro.

Governor Tomkins March and Quickstep is a paired set, different from a later set, Governor Tomkins New Grand March and Pas Redouble, also in tribute to Daniel Tompkins (1774-1825). Both times, the name is misspelled as Tomkins, but scholars confirm these pieces are in honor of the fourth governor of New York (1807 to 1817), who also became the sixth vice president of the United States.

Thema with 30 Variations (1803-6) is a fantastic set of variations, simple yet beautifully nuanced. Hewitt explores pianistic figurations in both hands to develop the opening material in a variety of rhythms.

The title page of Il introductione di preludio (1807) is annotated “being an easy method to acquire the art of playing extempore upon the pianoforte interspersed with a variety of examples, showing how to modulate from one key to another and from which knowledge of the science of music may be acquired; composed & dedicated to John Parker Esq. by James Hewitt, professor of music.” From the many works in this volume, researchers believe these Capricios and Preludios are original works by James Hewitt.

Lady Spencer’s Allemande is the final page from Olla Podrida no. 1 (1804). The full work was unrecordable due to the surviving score being damaged and incomplete.

Governor Lewis’ March is believed to be in honor of Morgan Lewis (1754-1844), the third Governor of New York. He fought in the American Revolutionary War and in the War of 1812. Another piece in tribute is Governor Lewis’ Waltz, also published by Hewitt as “A favorite German Waltz arranged for the Piano Forte”.

Mark My Alford: A favorite Air with Variations (1808) will be recognized by listeners as variations on “Twinkle, Twinkle, Little Star”. The original words from Samuel Arnold’s Children in the Woods opera begin, “Mark My Alford all the joys tending on a wedded life, heartfelt bliss which never cloys, the supremely happy wife. Him she loves always possessing, cheered through life by heaven’s blessing.”

Olla Podrida no. 3 (1804-07) opens with a Largo introduction followed by a fulsome Allegro moderato. A selection of popular melodies are then used: Washington’s March; Red Cross Knight; The Friar of Orders Grey; Polly Put the Kettle On; Oh Lady Fair; Giles Scroggin’s Ghost; Tid Re I; Hail Columbia; and finishing with a version of Governor Lewis’ Waltz.

A Sonata for the Pianoforte (1809) is a two-movement work, modelled on Hewitt’s second sonata of op. 5. In the both sonatas, the first movement is in C major, in binary form, and the second movement is three variations on the melody ‘Plough Boy’. Both sets of variations are similar, with only slight decorative variance between the two.

The Battle of Trenton, A Favorite, Historical Military Sonata (1797) is a large-scale piece. The Introduction sets the scene, with a description of the triplet pattern depicting the “army in motion”. The octave As are marked, “general orders”, followed several bars later by D major chords portraying the “acclamation of the Americans”. “Drumbeats to arms” heralds in Washington’s March. We next have the American Army crossing the Delaware river, then trumpets sounding the charge. The attack is a D major presto with broken octaves and scales, cannons and bombs notated throughout. The Defeat and then the Flight of the Hessians ensues. Moving to D minor, Hewitt illustrates the Begging Quarter, before the battle begins once again. This culminates in “general confusion” and a climax landing on D dominant 7. A G major section marked “The Hessians surrender themselves prisoners of war” follows. The “articles of capitulation” are signed and, followed by the “grief of the Americans for the loss of their comrades killed in the engagement”, a Lento section in D minor. Hewitt then moves to Yankee Doodle with drums and fifes; a quick step for the band; trumpets of victory; and grand Allegro of “general rejoicing”.

Roxalana is a piano transcription of the second movement of Haydn’s Symphony No. 63. The six variations follow Haydn closely, with modifications made to make the music suit the piano.

Gen. LaFayette’s Grand March, as performed by the Boston Band (1825) and LaFayette’s Quick Step (c. 1824) were written to honor the Marquis de Lafayette during his tour of the United States in 1824-25. Lafayette was a French general, and in his youth had led troops under George Washington in the Revolutionary War.

Trip to Nahant, a favorite rondo for the pianoforte (1811) and Nahant Waltz both allude to a peninsula off northeast Massachusetts by that same name. Settled in 1630, Nahant was a popular place to visit from Boston by steamboat.

The Augusta Waltz (1821-23) was composed during Hewitt’s time in Augusta, Georgia, where he conducted orchestras and performed in various Southern cities.

Scotch Medley opens simply, with an introduction that ushers in the first Scottish melody, “Nae gentle Dames”. This is followed by “My love is but a Lassie yet”, “O Misk Misk”, “Duncan Gray”, “My Patie is a lover gay”, “She fair and fause” and “O my love is like the Red Rose”.

Hewitt developed a facial cancer and was operated on in 1826. The wound did not heal and his illness worsened. He died in Boston on August 1, 1827.

A new name? Well it certainly is for me. James Hewitt was an Englishman, from Devon, who made his way to the USA in his early twenties and became their first really significant composer and here is his life’s work, in a box set of four CDs amounting to over one hundred tracks….

There is quite a variety to be discovered in Hewitt’s output but the language and style is very much music of its time – the mid-Classical period. The type of composer which comes to mind is Muzio Clementi (d.1832) or some lesser-known figures that you might find set for middle grades of piano exams. Indeed, Hewitt’s music would work well in a didactic context, particularly with the Sonatas and the even shorter Sonatinas….

I’m not really convinced that the music is really worth too much attention. This is not to decry in any way the neatness, clarity and utter persuasiveness of the performances and the closeness and warmth of the recording. Hewitt is mostly a good melodist and the Sonatas particularly have an especial charm….

You can read the full review here. 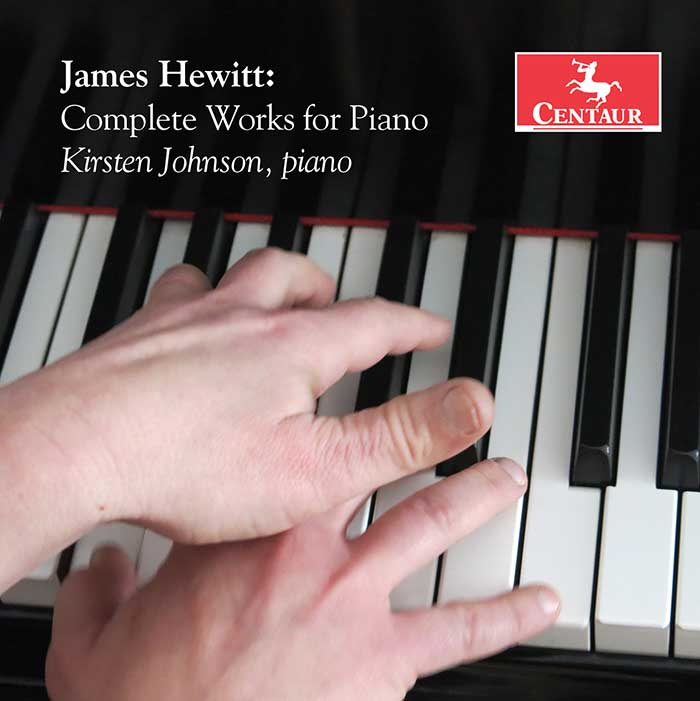