Dances in the Canebrakes

A Day in the Life of a Washerwoman

In the Land O’ Cotton

Florence (Smith) Price was a pianist first and foremost. Born on April 9, 1887, in Little Rock, Arkansas, she was taught the piano by her mother from a young age, playing in her first piano recital at the age of four and having her first composition published at eleven. She went on to study organ, piano and composition at the New England Conservatory in Boston, graduating as a double major with a teacher’s diploma in piano and a soloist’s diploma in organ.

After her studies, Florence returned to Arkansas to teach music at local colleges, and after several years moved to Atlanta to lecture at Clark University. In 1912 she moved back to Arkansas upon her marriage to Thomas Price and set up a piano studio.

Price knew the piano intimately – it was a natural vehicle for her compositional genius.

Price’s masterful Dances in the Canebrakes (1953), one of her last compositions, were no doubt inspired by the Arundinaria gigantea, or Giant Canes, a type of North American bamboo shrub, which used to be common in the floodplains of the southeastern United States. Vast swathes of these were cleared by African slaves to make room for cotton. The first, Nimble Feet, is a rag in 4/8, a meter commonly used by Price. This gives the beat to the eighth note in a fast 4, rather than emphasising the quarter note in a more leisurely 2. The melody is disjunct, presented in syncopated rhythms between the hands, conveying energetic dancing at the end of a day of clearing thickets of tall canes. Tropical Noon is more leisurely, a slow drag dance, with the dancer languid and taking a break in the heat of the day. Silk Hat and Walking Cane is a cakewalk, a dance which was sometimes used by slaves to mimic their master. Here we have the wonderful pastiche set by Price of a slave donning a silk hat and prancing about with, perhaps, a silver-topped walking cane.

In her music, Price is a master of rhythm, humour and nuance, using her skilful writing sometimes for caricature, sometimes nostalgia, but often for just plain fun. Ticklin’ Toes (1933) is infectious, a fast dance in 4/8 which scampers around the keyboard, offset by a middle section which seems to ask, ‘Shall I keep going?’ Cabin Capers is another such piece – with jokes and campground antics being depicted through this fast romp in 4/8. The Goblin and the Mosquito (1951) reminds one of Aaron Copland’s The Cat and the Mouse (1921) with grace notes and patterns using alternating hands painting the picture of a fleeting goblin chasing a flitting mosquito – or is it the other way around? In Coquette Price characterises a flirt, with the opening teasing section contrasted with a richer melodic cantabile, where the minx tries to persuade her love of her charms.

Practice Time, the second piece from At Our House, is a tongue-and-cheek glimpse into life at home, preceded by the agitation of The Washing Machine and followed by the charming Tip-Toe to the Cookie Jar. One can imagine a young child tiptoeing to the cookie jar with the anticipation of a mouth-watering chocolate chip cookie.

A Day in the Life of a Washerwoman (1938-1940) is another suite which portrays everyday life, from dawn breaking to the sun setting. The title and manner of Jig Jog suggests bouncing along a rural lane on a pony, while in the syncopated rhythms of Bayou Dance (1938) Price perhaps remembers the marshy wetlands around Little Rock, where she grew up.

In the Land O’ Cotton (published 1928) reflects the economic driving force the cultivation of cotton had in the American south. The first piece conveys the mechanical sound of the cotton gin through repetitive chordal motion between the hands with a suspended melody over. The middle two movements dream of a better life and express, without words, a song of longing. The final piece is a celebratory ‘juba’ after a day in the fields where one can hear the foot stomping inherent in this dance. To a Certain Pair of Newlyweds is also a vibrant dance in the juba style, the only surviving piece of a set entitled Pieces to a Certain Pair of Newlyweds.

More dances permeate these discs, including three waltzes: Rainbow Waltz (1939), Whirl Away Waltz (1949) and Cherry Blossoms in her Hair (1943). They are all gracious, with elegant piano writing and artistic flourishes. Cherry Blossoms in her Hair was originally set as the opening movement of At Our House, with the title, “Debutante Waltz, or Sis and Her Beau”. Price often rewrote, reordered and/or renamed pieces; in fact, one of the challenges of making a recording is in deciding which score or editorial note to follow. There are certainly years of scholarship ahead for research and detailing of this marvellous repertoire.

Few of Price’s piano pieces have non-programmatic titles. Chief among those are the sonata and the preludes. Price’s Sonata in E minor (1932) is her largest work for piano, opening with a grand introduction which ushers in the lively allegro theme. The second melody, a questioning Allegretto, is then developed and explored in this sonata-allegro form. The romantic nature of the first movement is followed by a slow movement in rondo form with a spiritual-like opening theme. The plaintive vocal line tells a story, conversational and poetic. This is first contrasted with a short Più mosso, which seems to be a memory of happier times, and then later with a more turbulent, passionate section in E minor. The sonata’s last movement is a merged ABA form in 6/8 with a lively rondo finale. Entitled Scherzo, the opening melody is like a tarantella dance, perhaps influenced by Mendelssohn’s Song Without Words, Op. 102, No. 3. (We do see further influence of Mendelssohn’s Songs Without Words in three homonymous pieces on this disc.) The 6/8 scherzo goes directly into an Allegro in 4/8. The Allegro is in sonata-rondo form, with a jaunty opening melody in E minor contrasted with a more lyrical melody in C major related to the ‘spiritual’ theme of the second movement. After the return of the rondo melody, a jocular tune in G major is set between the hands, with clever piano writing fluidly moving through shifting tonal centres. The rondo theme returns, with a transposed second section ending in ephemeral pp triplet patterns. The final statement of the rondo grows in octaves, arpeggios, passagework, bombastic chords and fast scales to a thunderous conclusion. Sonata in E minor won first prize in the piano category in the 1932 Rodman Wanamaker Contest in Musical Composition for Composers of the Negro Race, the same competition in which Price’s first Symphony won the symphonic work category.

Price’s five Preludes (1926-1932) were begun in Arkansas but then completed in Chicago after the Price family’s move there in 1927, fleeing the race-related unrest of the south. The fourth, though part of the original set, is also named ‘Wistful’ in another manuscript copy, perhaps packaged by Price as a stand-alone piece for a publisher or event. Price was the type of composer who revisited works and continued her relationship with them past the first setting down of the notes.

Price was fond of depicting natural themes, ranging from her A Hillside (1940), Honeysuckle (1939, also published as A Southern Sky) and Honeysuckle at Dusk (1941, ‘Memories of the South’ in the manuscript) to her On a Summer’s Eve (1939), a lush piece in G-flat major which creates a gorgeous sound world of colour. There are pieces about water: Dark Pool (also named Sea Murmurs), On a Quiet Lake (1929) and Placid Lake (1949), and two boat songs, Dream Boat (n.d.) and Barcarolle (c.1929-2932). In the first, the lulling motion of water begins in the left hand, then moves to the right, with the final statement in rolling arpeggios between the hands. In Barcarolle, the melody is a lovely gondolier’s serenade against the rocking chordal motion in the left hand.

Memory Mist (1939) is dedicated to Price’s daughter Edith. An air of nostalgia is created with beautifully rich scoring, extended harmonies and shifting colours. This recording is based on the Barbara Garvey Jackson edition. I chose to use the sostenuto pedal in places to carry through lower notes and avoid obscuring the exquisite upper material.

Price wrote masterfully for piano, leaving a significant contribution to the mainstream piano repertoire. She died of a stroke on June 3, 1953, in Chicago, Illinois, June 3. Her music and legacy live on.

“This new set…includes no fewer than 34 premieres – for that reason alone, it’s worth hearing. Johnson is an engaging guide throughout.”

“Johnson is the perfect executant: unrushed, loving, joyous….The result is a triumph.”

“There are lots of brilliant character pieces among the miniature dances and rags and tiny expressive tone poems on Kirsten Johnson’s world premiere-studded album of Florence Price’s piano music.”

“This brand-new release is a HUGE album of Florence Price’s piano music. American pianist Kirsten Johnson has recently completed her recordings of the complete set of Amy Beach’s piano works, and now this is an album featuring the complete set of Florence Price’s piano music! And, there are a lot of pieces that we have never heard before. In fact, there are 34 world-premiere recordings on this album!!”

ABC record review, 6 June 2022, including the radio premiere of A Hillside
https://www.abc.net.au/ 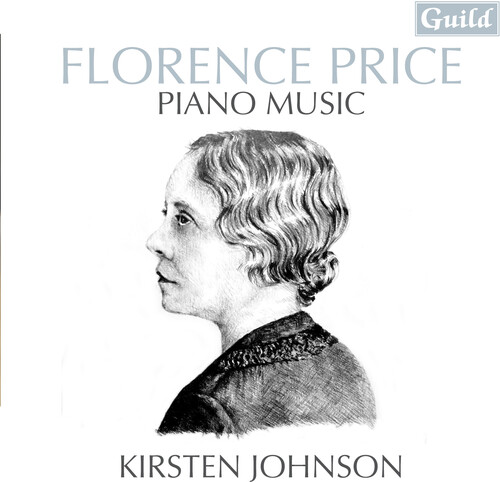