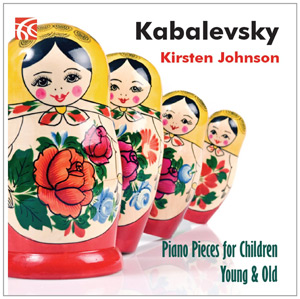 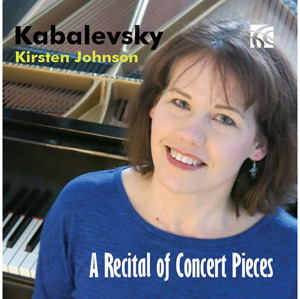 I discovered Dmitri’s Kabalevsky’s music as a student.  I remember learning his Seven Good-Humoured Variations on a Ukranian Folksong, op. 51, and carefully working out the technique that each variation required.  It is much easier for me now!

A prolific composer, Kabalevsky (1904 – 1987) wrote four piano concerti, three piano sonatas, four symphonies, five operas, a violin concerto, two cello concerti, many songs and other works, including lots of piano pieces for young people.  Some of these are programmatic, depicting childhood scenes; others are pedagogic, providing short pieces for the learner.  Not all are easy!  But they are all inspired and charming, and very playable.

Born in St Petersburg, Kabalevsky moved to Moscow when he was fourteen where he studied at the Scriabin Musical Institute.  He was a pianist, a composer and a keen painter.   In 1925, at the age of twenty-one, he entered the Moscow Conservatory to study composition with Nikolai Myaskovsky and piano with Alexander Goldenweiser.  Kabalevsky later taught composition at the Moscow Conservatory.  He was a founding member of the Union of Soviet Composers, and the editor of their magazine, Soviet Music.  Kabalevsky was well regarded by the Soviet establishment and was one of the most powerful figures in Soviet musical life, promoting Social Realism in music and involved in shaping the Soviet system of musical education.

A major discovery on the Concert Pieces disc is Kabalevsky’s opus 1, Three Preludes for Piano.  It is a world premier recording.  The three preludes were written in Kabalevsky’s first term as a student at the Moscow Conservatory, in the autumn of 1925.   The pieces are expressionistic, full of shifting colours with extended harmonies which hark back to Kabalevsky’s teenage years as a student at the Scriabin Musical Institute, where he, needless to say, would have been well acquainted with Scriabin’s work.