Six Imitations of the Airs of Different Nations (5’34”)

Benjamin Carr was born in London on September 12th, 1768. He trained as a musician with Samuel Arnold and Charles Wesley, and worked in his father’s musical publishing business as an engraver. Carr immigrated to the United States in 1793, followed by his father and brother in 1794. Carr worked as an actor, singer, pianist, organist and composer. He established his music publishing firm, Carr’s Musical Repository, in Philadelphia, with a branch in New York, but then sold the New York business to James Hewitt in 1797.

Carr was prolific as a composer, writing operas, pantomimes, masses, sacred hymns and anthems, many songs, and a prodigious amount of music for organ and pianoforte. His works for the piano include a pedagogical method, The Analytical Instructor, op. 15 (1826), Sonatas, Sonatinas, Preludes, Waltzes, Rondos, many sets of variations and various other works.

The Federal Overture (1794) captures the mood of Colonial America – patriotic and proud. As a new immigrant to the country, Carr put down his mark by composing an orchestral work, here in its piano version, which was pure Americana: after a grand introduction, a series of popular melodies follow, representing the various heritages now making America home, and culminating with The President’s March and Yankee Doodle.

Six Imitations of the Airs of Different Nations (1800), no. 20 in Carr’s Music Journal for the Piano Forte, continues this theme of representing the gathered cultures of early America, with short, atmospheric pieces reflecting English, Scottish, Irish, Welsh, Spanish and German ancestry.

The Preludes, op. 13 (1813), published in Musical Miscellany as no. 65, have at the start the instruction to use each prelude before a piece on the same tonal center (major or minor). I have taken Carr’s advice, and have set these short preludes throughout the discs, pairing them with pieces which match the key note.

There are quite a few rondos on these discs, including the Rondo in Eb (1803), the Introduction and Rondo (Music Journal no. 60, 1801), the Rondo from Carr’s opera “The Archers” (1796), and much use of the rondo form in the Sonatas, Sonatinas, Divertimentos and other pieces. The Rondo in Eb, Musical Journal no. 116, carries this performance note: “If the Piano has additional keys play those Passages marked 8va: an Octave higher.” This annotation also occurs in other pieces on these discs, reflecting the transition taking place at the time from smaller keyboard

instruments to larger ones with an extended range. Carr’s rondos follow a traditional ABACA form, with the C section usually in the relative minor.

Three Divertimentos are found in Vol. 1, no. 18 of Carr’s Musical Journal for the Piano Forte (1800). The Musical Journal was a highly successful subscription series, published in five volumes over four years, with each volume in two parts: vocal music, with piano; instrumental

music. Carr included a range of pieces from a variety of composers as well as some of his own compositions.

The Six Sonatas (1796) Carr wrote for the pianoforte are simple, early classical sonatas which are in one or two movements and primarily in rounded binary or rondo form, with only the first movement of No. 6 in sonata-allegro form. No. 4 is written for two performers at one piano, and rather than omit it from this solo album, I decided to include it to give a complete set of the sonatas. It is performed en famille, with my daughter, very much how it would have been

enjoyed over 200 years ago. The fifth sonata uses a melody from Carr’s opera, The Archers, and is very similar to his Rondo of the same name.

Carr’s Dead March for General George Washington, paired with a Monody sung by Miss Broadhurst, was performed at the Lutheran Church, Philadelphia, on 26th December, 1799, as “Part of the Music Selected for Funeral Honours to our late illustrious Chief.”

Yankee Doodle, An Original American Air with Variations (1795), was the first publication of a set of variations on this popular melody in America. It begins softly, in 2/4, with the following variations exploring various piano figuration patterns, including a foray into D minor and variations in 3/8 and 6/8.

Applicazione Addolcita: Twelve Airs and a Ground, with Variations or arranged as Rondos, op.6 (1809), are all preceded by a very short Prelude. This prelude functions to establish the key, raising the curtain on the main act which follows. In The Saxon Ground, Carr sets out the theme, with every variation which follows restating the opening eight bars. Spanish Fandango, one of my favourite Carr pieces, paints a picture of the eponymous dance using rondo form. The Rose

introduces another melody, “Soft as yon silver ray” in the second contrasting section of the rondo form; as does Savoyard Air, using “another Savoyard Air” as the third variation.

The Siege of Tripoli, An Historical Naval Sonata for the Piano Forte (1804-05) opens with a low chord “Morning Gun” and the warfaring vessels at anchor prior to the Second Battle of Tripoli Harbor (1804). “Marine March”, as “The Americans prepare for the Siege”, interspersed with “Moorish March”, which is music heard from Tripoli, precedes another ‘cannon’ and the musical phrase labelled: ‘Commodore Preble gives the word of command’. Carr continues with fife and drums calling the marines to quarters, before the battle commences. Octaves, scales, arpeggios, glissandi and thundering chords representing pistol shots convey the chaos of battle. A Naval Medley of songs follows the siege, as those that survive relax on their way back to Malta. A rousing Yankee Doodle turn concludes this epic piece.

of the Archers or Mountaineers of Switzerland, no. 7 in M.M., is one of the few remaining extracts of Carr’s lost opera, premiered in New York in 1796.

Musical Miscellany also has simpler pieces, accessible to his subscription audience to play at home: the Progressive Sonatinas were published as No. 2 in this series, and have an accompaniment “so arranged that it can be performed upon the upper notes of those Piano Fortes which have additional keys”. This pianist has played both parts, and thanks her engineer for melding the two together beautifully.

Musette de Nina, With New Variations for the Piano Forte (1814), no. 55 in M.M., is a piece based on a melody from Nicolas Dalayrac’s opera Nina. Both this work and A Divertisment on the Favorite Air of The Plow Boy (1814), no. 49 in M.M., capture the character of their melodies with idiomatic and effective writing for the piano.

Fantasia on the Air “Gramachree” is the eighth piece of Le Clavecin (1825). It is improvisatory in nature, with a grand introduction which precedes the theme and variations. The piece shows Carr’s mature compositional style, which reflects the influence of Chopin and Liszt in Romantic gestures and displays of pianistic virtuosity.

Grand Artillery March, the first piece of Le Clavecin, is in ABA form with the middle section in the dominant. The duets in Le Clavecin, which are mostly transcriptions of orchestral overtures, are not included in this recording. Nos. 9-20 of Le Clavecin are also published as Twelve Airs, op.

17. The Campbells Are Coming (No. 10) and Little Bo Peep (No. 12) are both popular melodies in delightful renditions for piano. The charming La Serenade (No. 13) and The Carolinian Waltz (No. 14) are effective salon pieces, happy and light. The Sultan Saladin (No. 15) was a popular melody at the time, and is here in ABA form with alternation between minor and major tonalities. Une Petite Ouverture (No. 9), very much in an orchestral style, is in F major and paired on this disc with The Spanish Hymn (No. 16), a beautiful set of variations on a liturgical theme. They are followed by Thema Con Variazione (No. 17); Drink to me only with thine Eyes (No. 19); and The Genoa Ground (No. 20).

The Pianoforte Waltz (M.M. No. 83) and Mantua Waltz (1825) are both delightful pieces in rondo form, pianistic and well-crafted representations of this dance. Di tanti palpiti or Hail to the happy day (M.M. No. 75) is arranged as a rondo for piano with an optional accompaniment top line for flute or violin, which has been omitted in this recording.

When the Hollow Drum (M.M. No. 85) opens with the drum beating the rhythmic pattern which unifies the piece. The right-hand takes on the role of fife, playing figures and running patterns into the upper register of the piano. It is in rondo form, with the second contrasting section in the relative minor.

Carr passed away in Philadelphia on May 24, 1831. He left behind a legacy of early American piano music which we are only now beginning to appreciate.

Benjamin Carr Piano Music – American Through and Through

It’s easy to forget that American classical music didn’t begin in the mid-20th Century. Europeans brought their musical traditions with them to the new continent. After the American Revolution, some composers worked to develop a new style of music for their new nation. Benjamin Carr was one such pioneer. ….

This release collects hours of Carr’s piano pieces. It presents a snapshot of life in the Federalist Period. Most of Carr’s compositions were for amateurs. Most genteel American families had a pianoforte in their homes. Playing the instrument was an important skill for middle and upper-class young ladies.

Although the music may be simple, it’s not simplistic. In his six sonatinas, for example, Carr develops his material as skillfully as Haydn. (It’s no accident they resemble Haydn’s piano sonatas).

The Preludes, Op. 13 present some challenges for the player. They sound as if Carr transcribed them from his famed organ improvisations. They may have been inspired by Bach, but I’d say it’s likely Carl Philipp rather than Johann Sebastian.

Carr was looking for an American style. Often he incorporated American tunes into his music. His most popular work, the Federal Overture used “Yankee Doodle” as a starting point. It also mixes in other tunes of the day, such as “Oh Dear, What Can the Matter Be.”

“Yankee Doodle, An Original American Air with Variations” takes the tune through some innovative changes. I think this would make a great companion piece to Charles Ives’ “Variations on America.”

Kirsten Johnson has done an in-depth study of American music. Her catalog includes recordings of piano music by Arthur Foote, Amy Beach, and James Hewitt (one of Carr’s contemporaries). She understands the style and the creative drive behind Carr’s music.

This might not be a release to listen to from start to finish. But every piece has its own delights. I recommend dipping into this treasury time and again. This is real American music by a real American! Sure, he was an immigrant, but that’s part of the American character, too. 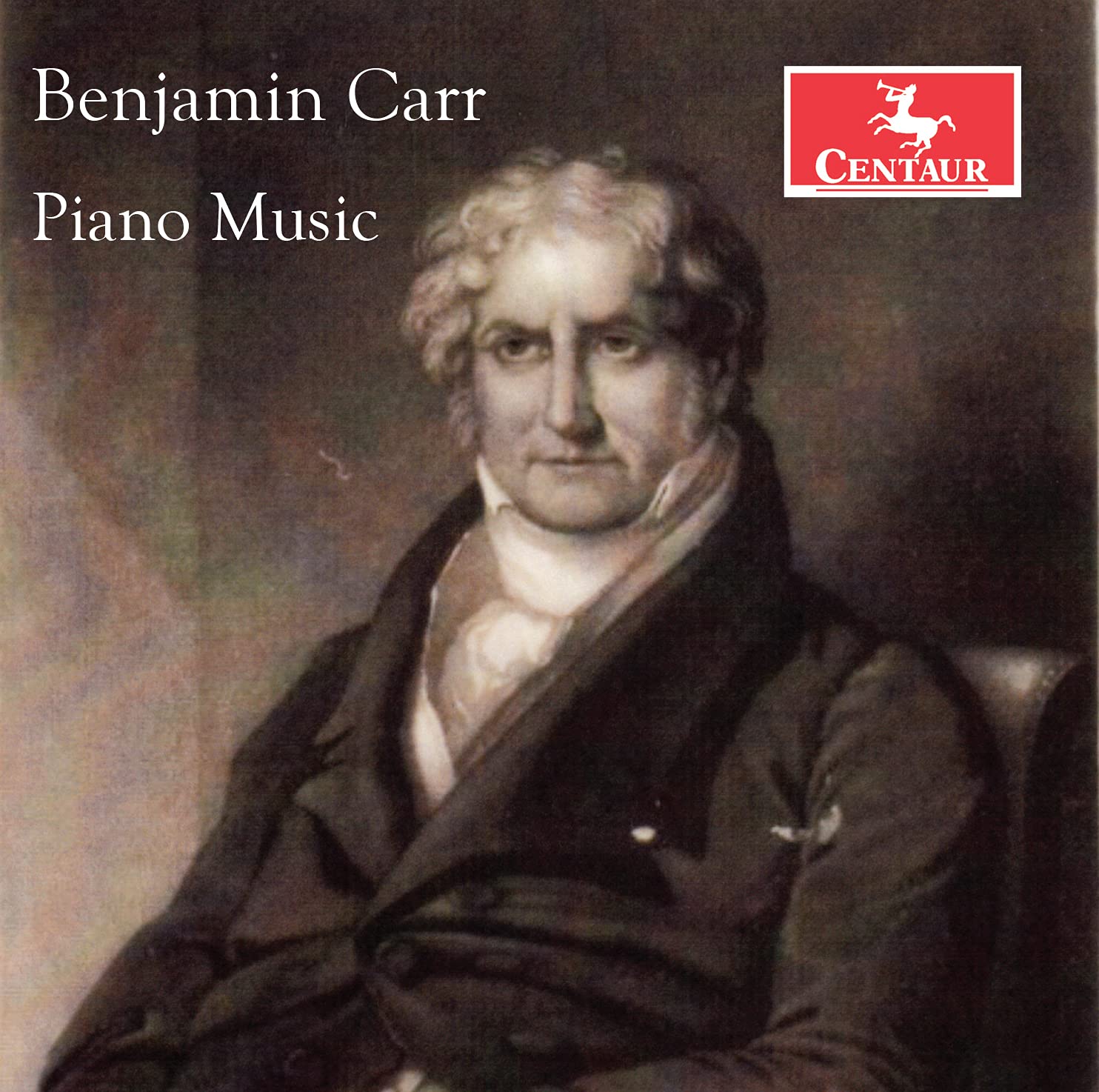 You can listen to audio samples here.