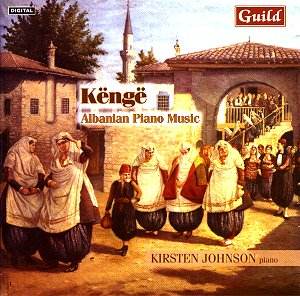 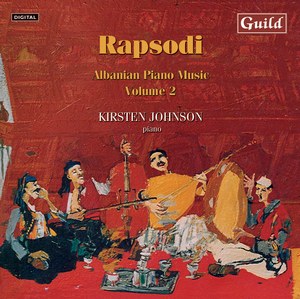 Click on the jacket covers for further information on each of these discs (tracklisting, jacket notes, audio samples and reviews).

I had a Rotary International Foundation Scholarship back in 1992-1993.  While studying at the Hochschule für Musik in Vienna, I was invited down to Albania to give a piano masterclass and recital.  Flying into Tirana was an eye-opening experience.  Communism had only recently fallen, and the country was still lacking a lot of infrastructure.  There was only one traffic light in Tirana, at their main square.  The roads were either dirt or full of pot holes, with animals freely wandering about.

I stayed in the home of a composer, Llazar Morcka, who had been sent to a labour camp under Enver Hoxha’s regime.  Hearing his story, and meeting other composers, inspired me to delve into the Albanian piano repertoire.  It became the subject for my doctoral work.

I travelled to Albania two more times for research in the 1990s, once playing a Mozart concerto with the Chamber Orchestra of Tirana, another time playing a solo concert in the Opera Grand Hall.  I collected scores from the National Archives, and was given copies of scores by many composers themselves.  After finishing my doctorate, I wrote to quite a few record labels and was fortunate that Mr Kaikoo Lalkaka of Guild (www.guildmusic.com) believed in my project and agreed to a CD of Albanian piano music.  After Këngë’s release and the amazing reception it had in the press (‘Johnson plays with nuance and color; the recording is rich and resonant.’ American Record Guide), I recorded a second disc of Albanian music, Rapsodi.  In between the two discs, I made a concert tour to Albania under the auspices of the American Embassy and played a televised concert to a hall full of dignitaries and VIPs.  After a solo first half of American and Albanian solo pieces, I was joined by two gifted Albanian musicians for Charles Ives’ Piano Trio.  I also played a solo concert in Vlorë, and remember bringing the house down with my encore, Joplin’s Maple Leaf Rag…they’d never heard it before!