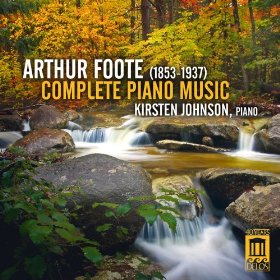 I knew all about Arthur Foote as a theorist and composer, but I did not know he had written so much for piano!  I was looking for a follow-on project to the Amy Beach discs and came across the wealth of piano music which Foote had composed.  I could not believe it hadn’t been recorded before!  Delos liked the idea of having Foote’s piano music, so the project commenced.

While Foote and Beach are lumped together as part of the ‘Boston Six’, the group of composers working around Boston at the end of the 19th century, they do have distinctive styles.  Foote uses forms and structure in a more precise way, and his harmony is planned rather than instinctive.  It is well-composed music, thoughtful and ordered.  I love the first set of Foote’s pieces, the Trois Morceaux, op. 3.  It is beautiful, and fits the hand really well.  I also think the Suites are great, and deserve more playing as part of the standard piano repertoire.  Learning all of Foote’s piano music gave me insight into his world, and how his compositional style evolved over time.   There is really something for everyone in these pieces!  The five movements of Serenade, op. 45, for example, are a super set which work well on their own for learners or in their entirety for performers.

Some of Foote’s work might be primarily pedagogical, thinking of the 20 Preludes, but selections could be programmed nicely into a concert.  The technique involved serves a musical purpose, being more than notes to improve a particular aspect of piano-playing.  His pieces for left hand, op. 37, are a case in point.  Sure, they are a work-out for the left hand, but they also have so much to say musically.  I loved learning that set!